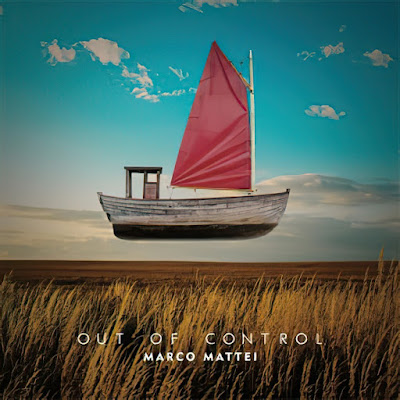 At first glance, this album looked like typical prog album.  Great imaginary cover, a fishing boat sailing above a farm field.  Great concept.  It instantly makes you want to check out what’s inside.
The music itself is very multi-dimensional. Not necessary a prog album as advertised above, but a very musical record, with some progressive elements.  It depends which song you focus on.
The only common denominator here is guitarist Marco Mattei, who is obviously present on ever tracks.  The songs include many guest and basically a different cast on each song.  While the instrumental side of the album is very stylistic, it’s the vocals that give each song a distinct personality.  Each song features a different voice, and often a different approach to vocals.  It gives the album a lot of variation and makes it much more difficult to pin down.  And if that wasn’t enough there are a few instrumental tracks.
There are some interesting guests on the album.  Paul Mastelotto and Tony Levin of King Crimson fate both made appearances separately.  Jerry Marotta also appears on few tracks.  There are several vocalists, taking on different songs.  This writer’s favorite was definitely Richard Farrell on a track called “Void.”  It is also my favorite song off the album.
Marco Mattei’s guitar player is superb!  Not only is he a great player who likes to take chances, but a talented writer with a lot of potential.  Throughout the record, Mattei plays around with different sounds, string instruments, and effects.  Mattei delivers an album filled with a lot of feel and color.  His soloing in “Gone” is outstanding.
“Out of Control” is a record with multiple moods.  It’s a really well though out and put together set of songs.  Marco Mattei has a special way of touching the listener with his music.
Mark Kadzielawa
Posted by 69 Faces of Rock at 4:35 AM